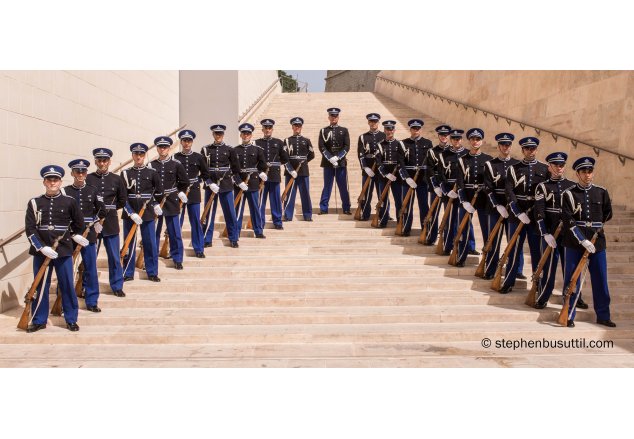 The Malta Police Precision Drill Team is a marching unit that performs exhibition drill based on military routines.  The Precision Drill Team (PDT) is often referred to as the Silent Drill Team as no orders are delivered and each member has to memorise the entire routine.  It was formed in 1988 and has ever since received overwhelming public response.
During the entire performance, they execute a series of calculated drill movements and precise handling of their famous hand-polished 4.5 kg Lee Enfield 303 (1940) rifle with fixed bayonets, making their performance rather risky.

The PDT is among the best showcases of the Police Force and boasts to have established itself among the very few police forces having similar display teams around the world.  PDT officers and their performances are one of the finest examples of what dedicated training and teamwork produces in today’s Police Force.

Team members are all regular officers hailing from different sections of the Police Force.  These officers usually gather for training a few weeks prior to a display and therefore they have to share the Team’s commitments and their normal police duties.

New members are selected for this unit after finishing their recruitment to become constables having discipline and smartness as mandatory prerequisites for qualification to join the Team.  The PDT performs annually as part of the Police Anniversary celebrations (July) and the Malta Military Tattoo (October), and occasionally during the year in public events. The PDT compliments the Malta Police Band in ceremonial duties and are proud to have thrilled thousands of spectators for 26 years.
The Team is under the command of Snr. Inspector Stephen Mallia.